The Volunteers meet on the First Thursday and third Tuesday of the Month. Organisation/administration is carried out by Peter Tompkins.

A list of works are circulated prior to each session

Heroic efforts from the volunteers who cleared the ditch along Common Lane. There was an excellent turnout, and they almost made it to the access gate and concrete bridge. It’s a tough task due to the amount of growth during the spring.
In the meanwhile, Richard Ghost strimmed around the new whips, planted for Jubilee. And… lots of litter was collected, three bags full.
A magnificent effort all round, especially as it is holiday time, it was warm and sunny, and there was a lot of traffic on the coast road. Well done all. 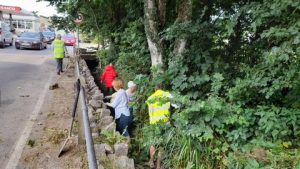 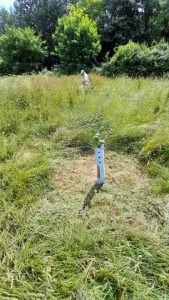 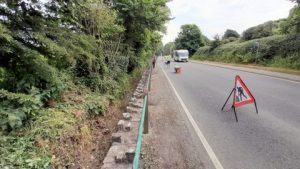 3 March – More great work from the village Volunteers – despite some very inclement weather! Phil, John and Sue completed the planting of the whips along the High Street wall in the playground. (Another) Sue maintained the area around the bus stop. Sue and Bryan have been tending this area frequently, and it’s a significant attraction in the village. The narcissi, snowdrops, and hellebores all add to its beauty. Tina and Pauline collected the litter from all over the village and meadows. And of course (another) John performs this task daily. Elaine, Sue, Phil, John trimmed the shrubs on the High Street and Phil cleared a drain and the small branches that had blown off the trees on the patch of land adjacent to the Old Forge. Thanks again everyone! 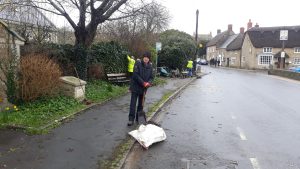 Spring (surely) can’t be far away! Thanks to Gill, one of our stalwart Volunteers, who has replaced the snowdrops on the village green, which for some reason didn’t appear this year. Now we will hopefully all be able to enjoy these little signs of hope for many years to come. 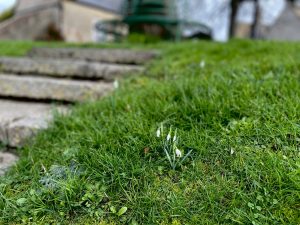 Gill says: “I felt really sad about the disappearance of the snowdrops on the  village green. So by chance I found some at Groves  in bundles of 15-20 bulbs in the green. I bought several bundles and have planted them carefully with a dose of decent compost for each bulb. I hope to goodness they ‘take’. It was a pleasure to do them on such a lovely day!”

More hard work in Common Lane! Sue and Elaine are featured in the photo and Julian was “behind the lens”. The photo shows where they finished by the road sign.

Meanwhile Val continued her work weeding the lanes of the village, producing three sacks of weeds to be burnt.
Tina and Pauline collected the litter, following the early morning daily litter pick undertaken by John.
Julian collected the dumpy bag of branches and leaves which “fell off the back of a lorry” on the corner of Common Lane in front of the car showroom, and returned it to the farm for processing.
David and Peter were joined by Richard and John to complete the distribution of the three piles of wood chippings to cover the ground adjacent to the three gates near the Timber Bridge, then more chippings spread to skirt around the whips that were planted in Corncrake last year, and then more spread around the mature fruit trees in Corncrake.
It is always nice that several village folks expressed their thanks with the achievements of these activities. Thank you volunteers! 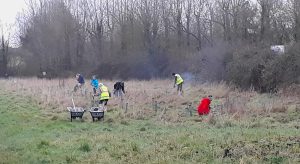 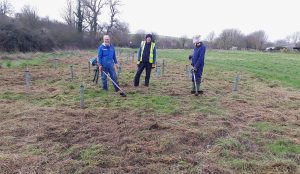 In advance of the planting of the 70 trees to mark the Queen’s Platinum Jubilee, the volunteers cleared the area around the whips in Corncrake which were planted last year.
They also cleared the vegetation in each of the fenced areas containing the oak trees. In the area closest to the recreation field, the oak whips which were planted last year still appear to be alive.,
We estimate that there are at least a dozen whips that are dead, and others that still need guards to protect them..
The volunteers excelled themselves and the “wooded” areas look so much better.
The volunteers also maintain the Forest School area in Corncrake for the school. Also, one of our volunteers has offered to trim the grass around the fruit trees during the year. 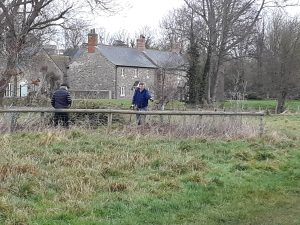 Feedback from the volunteers suggest that as the 70 trees are to celebrate the Platinum Jubilee year, it would be best to place them in a designated area together, rather than replace dead whips in the existing area.
The volunteers included Tina, Val, Elaine, Pauline, Julian, Paul, Philip, John, Ian, Philip, David, Richard, and Peter. A turnout of 13 to clear up Corncrake – an excellent day!

The volunteers have been hard at work again this winter trying to ensure that any storms would avoid causing disruption in the village.
Julian and Elaine spent the morning in the ditch at Common Lane. They tried to escape part way through, longing for a break and hot drink, commonly known as a “tea break”, but Pauline arrived with the drinks and biscuits.
As neither Elaine or Julian would accept a biscuit, this meant that they hadn’t worked hard enough, and they had to soldier on until almost midday!
Seriously, it’s an unpleasant task, but the satisfaction comes when you can take credit for clearing about one third of the weeds and vegetation from the side of the ditch along Common Lane. 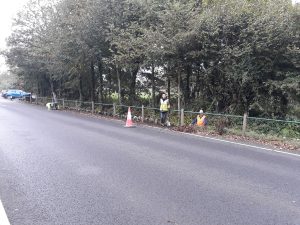 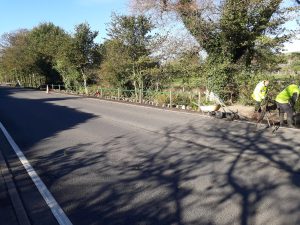 Phil and Mike emptied the silt from several more drains which is critical to drain the lanes in the village. Phil has been clearing drains in Annings Lane between the scheduled volunteer days.
And of course,  John can be seen picking up litter and even cigarette ends on a daily basis.  He’s passionate about clearing litter, and has beavered away for years, litter-picking not only from the village, but also the surrounding lanes. Even the pandemic didn’t interrupt his collection schedule!
Sue and Pauline filled two dumpy bags with yet more leaves laying around the bus stop. It’s a soul-destroying task, as they’re well aware that if the winds pick up, the area will be covered in leaves once more. In addition, they tended the plants and got rid of the weeds. 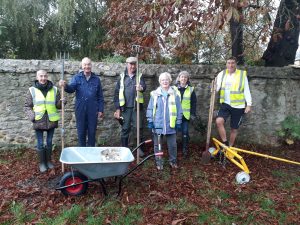